Ask the participants to position themselves once again, in response to the same statements that were addressed in stage 1.

Compare the results to the photos taken in stage 1.

Discuss how the participants’ answers changed following their understanding of the Evian Conference.

Keep in mind the core questions that were asked:

To further discuss the core question “What are legitimate and non-legitimate concerns for rejecting refugees?” and transfer the issue more directly into the present you can use the following statement for an open discussion. The delegate of Jordan outlines the problems of his country in dealing with the influx of refugees from Syria during a conference in Berlin in 2014. 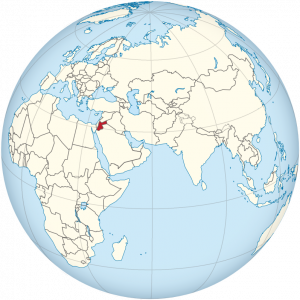 Jordan on the globe

Speech by Mr. Nasser Judeh, The minister of foreign affairs and expatriates of the Hashemite Kingdom of Jordan,

“Conference on the Syrian Refugee Situation – Supporting Stability in the Region”

“Jordan today is hosting around 1.5 million Syrians, more than 600 thousand of whom have arrived since the beginning of the conflict and less than 9% of the total number resides in refugee camps. The sheer population increase, by any standard, is beyond the means, or capacity, of any country regardless of economic strength. The shock to our education system as a result of absorbing more than 140 thousand Syrian students has shelved our development and educational reform plans and shifted the focus towards dealing with overcrowding of classrooms and running double shifts in some schools. Our health services also suffered an equal shock as the number of Syrian refugees seeking treatment in public hospitals has increased by nearly 250%, and the number requiring surgical operations in government hospitals has increased by nearly 600%…
In the fourth poorest country in water resources, a rise in water demand to 16% for 2014 is an existential matter in the long run as this nonrenewable resource is being depleted at this high rate as a result of hosting Syrian refugees and the gap between available resources and demand is widening significantly. Furthermore the pressures on water and waste water treatment infrastructure have reached unprecedented and unbearable levels.
In addition to these three fundamental sectors, the impact is across the board on the country’s economy, government services, infrastructure, security, and resources and we are approaching a “host country fatigue” in which the limits of our ability to address the needs of Syrian refugees is being reached. (…) As the numbers increase to unimaginable levels, the competition over space, service, jobs, or opportunity begins to create friction.
When rents in certain areas in Jordan increase by 300% as a result of the Syrian refugees, the burdens on the local community becomes unbearable. Similarly, the increase in classroom overcrowding to 41% of schools and bed occupancy rates to 95% in hospitals in the north of
Jordan provides a clear signal that the ability to share has reached its limits.
More seriously, the competition over job opportunities, as Syrians have not only taken 130 thousand jobs this year, but are beginning to replace Jordanians in the labor market thus planting the seeds of tension between the host community and refugees…
It was the Jordanian host community in the first phases of the crisis that catered and addressed the needs of Syrians as they began to arrive in Jordan in 2011, and it is this same community today that risks being plunged into poverty as a consequence of their initial welcome and hospitality. Until a political solution for the Syrian crisis is realized, one that (…) provides the conducive environment for the return of refugees to their homes, there is an urgent need for a more robust international response in support of host countries, (…) the international community has to help Jordan carry this huge burden.”

Additional Questions for an Open Discussion

To what extent is the current refugee crisis similar or different from the situation in 1938?

To orientate yourself you may try these resources:

What is the media role in covering the events and setting public opinion, and the imagery and language that is used by the media? (You want to use material given here or search for examples from media coverage then and now yourself).

Who should be defined as a refugee?